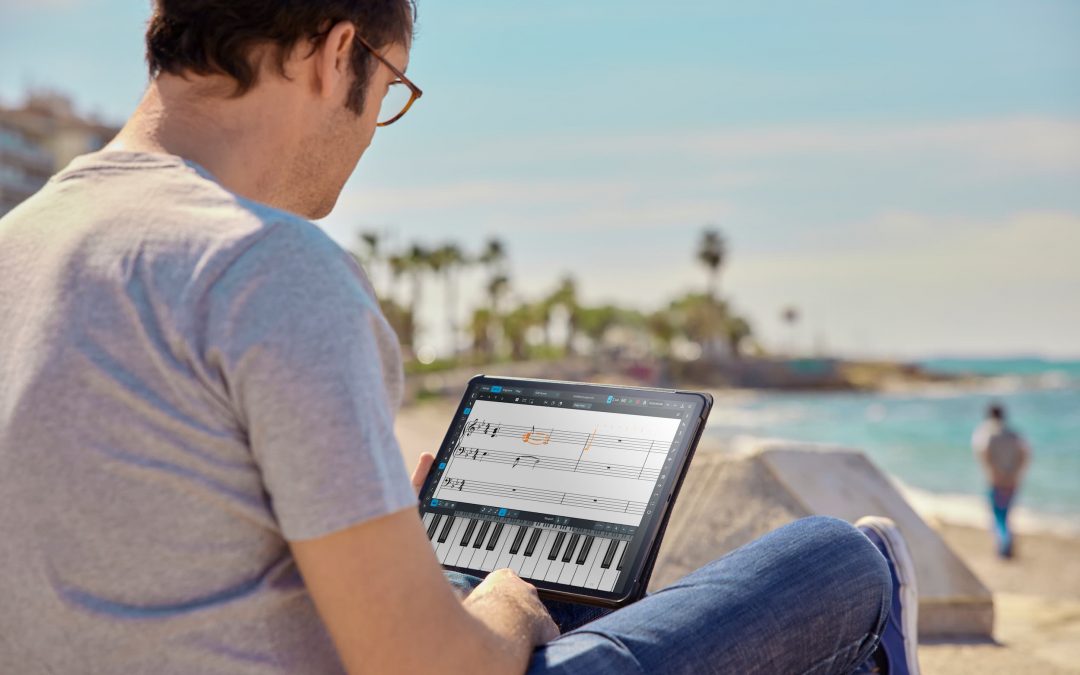 We are pleased to announce that we have today released a new update to Dorico for iPad, bringing it to version 2.4. The main focus of this update is on addressing issues that some users have experienced working with projects saved in iCloud Drive, and we have also taken the opportunity to address some other issues along the way.

Dorico for iPad has supported iCloud Drive and “Open in Place” since version 2.2, which was released back in April. This makes the app much more useful for users who have multiple devices, especially those who want to run Dorico on both iPad and on their desktop computer, because it means that projects you work on are automatically available everywhere. However, some users have encountered problems working with iCloud Drive, and today’s version 2.4 update aims to address those issues.

The most significant issue is that on some users’ iPads, no Dorico folder appears inside iCloud Drive in the Files app, which means that any projects created in Dorico for iPad 2.2 or 2.3, which were saved in iCloud Drive by default, would effectively become inaccessible once the project is no longer listed in the Open Recent page of the Hub, since you cannot browse to their location in the Files app or in the file picker accessed by tapping Open or Import File in the Hub. We are working directly with Apple to try to resolve this issue and make sure that the Dorico folder appears as expected on all iPads, but in the meantime Dorico for iPad 2.4 introduces an alternative solution.

On the Open Recent page of the Hub, you will now see a new set of buttons at the right-hand side, allowing you to choose exactly what is shown in the list or grid of projects below:

We have also made a change such that, by default, new projects you create in Dorico for iPad 2.4 will be created in local app storage rather than iCloud Drive. A new Files section has been added to the General page of the Preferences dialog, which you can access via the application menu at the right-hand end of the toolbar when working on a project, and you can if you prefer change it such that Dorico will create projects in iCloud Drive by default. (Previously, a Document Storage Settings section appeared in the Settings app, but these settings actually had no effect on Dorico’s behaviour, and those settings no longer appear.)

We have also looked into some other issues reported by some users concerning opening files from iCloud Drive on iPadOS 14, which are now resolved, and have addressed some problems that could result in Dorico notifying you that the current project has been updated outside the app. We expect there may be some further changes to come in this area in future updates.

The Dorico for iPad Lifetime Unlock in-app purchase also makes use of Apple’s Family Sharing feature, so any other iPads in your family group will benefit from a single purchase.

When you run Dorico for iPad 2.4, it will pop up a prompt a few times during the sale period to give you the chance to purchase at the special price. You can also now choose Lifetime Unlock from the application menu (at the right-hand side of the toolbar when working on a project) to make your purchase.

Don’t forget that if you currently have an active monthly or annual subscription, we cannot cancel your subscription on your behalf. So if you choose to buy the Lifetime Unlock in-app purchase, please be sure to cancel your existing subscription so you are not charged for further renewals.

We have also been looking carefully at the analytics that are provided to us automatically by Apple and have fixed the top handful of crashes that users have been experiencing with versions 2.2 and 2.3 of Dorico for iPad. In particular, there were a couple of crashes that could occur when Dorico restarts and it tries to automatically restore the last project you were working on. This should work more reliably on all devices now.

We will soon be releasing the next update to Dorico 4 for macOS and Windows, which will reintroduce the percussion editor in the Key Editor (eagle-eyed users will spot that it makes its first appearance in Dorico for iPad 2.4) along with a number of other valuable improvements. Keep your eye on the blog for more news in the next week or two.