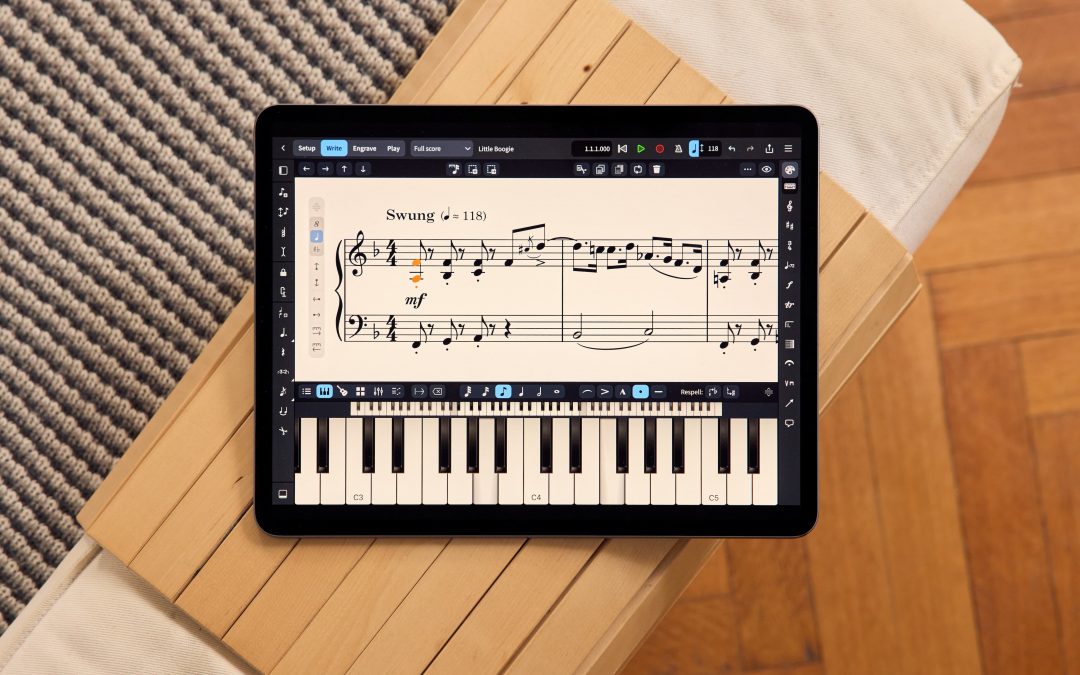 We are pleased to announce the immediate availability of Dorico for iPad 2.2, the latest update to the top-rated music notation and composition app for iPad, which supports opening and saving projects to and from their original locations, making it much easier to work with the same project files across multiple devices, whether you use Dorico only on iPad or also on macOS or Windows. It also introduces support for thumbnails for Dorico projects in the Files app, and on iPadOS 15 it also allows you to use Quick Look to get a more detailed preview of your projects.

Previous versions of Dorico for iPad could only save projects to the local per-app storage area on your iPad. This meant that if you had Dorico projects stored elsewhere on your iPad – for example, in a cloud storage location like iCloud Drive or Dropbox – then when you opened that project in Dorico, it would be copied to the local per-app storage area, and any changes you made would be saved only to the copy of the file inside Dorico’s local storage. If you wanted to then make those changes available in other devices, you had to use the Share option to share the updated project back to the original location.

Dorico for iPad 2.2 sweeps this inconvenience away: it implements support for an iPadOS feature called Open in Place, which makes it possible for an app like Dorico to open and save projects directly to and from other locations on your device. This means that when you open a project located, say, in your iCloud Drive or Dropbox, any changes you make to the project will be saved back there automatically – you no longer need to manually share the updated project back to its original location.

Beware that if you delete a project from its cloud storage location, Dorico will no longer be able to access it. Some cloud storage apps, like Dropbox, may allow the project to continue to be accessed for a time, despite it no longer appearing in the Dropbox app itself, it appears that recently deleted files in fact remain in the cloud storage for a time after deletion. Others, like iCloud Drive, will immediately invalidate the bookmark that Dorico saves for the project, so it will no longer appear in the Open Recent page of the Hub and can no longer be opened.

The Open Recent page of the Hub now shows the projects you have most recently opened, whether they are located inside Dorico’s local storage or in another location on your iPad. You can open Dorico projects from other locations either directly via the Files app, or via the dedicated cloud storage app, or by clicking Open or Import File in the bottom left-hand corner of the Hub.

Dorico projects that have been saved in Dorico for iPad or in Dorico 4 on macOS or Windows now show graphical thumbnails in the Files app on your iPad. If you are running iOS 15, you can additionally long-press the project thumbnail and then choose Quick Look from the context menu that appears to open a full screen preview of the most recently edited layout in that project.

Other changes and improvements

Dorico for iPad will be updated automatically on your device if you have automatic updates enabled; if not, simply run the App Store app on your device, tap your avatar in the top right-hand corner, then tap Purchases, find Dorico in the list of purchased apps, and tap Update.

If you haven’t yet tried Dorico for iPad, download it today from the App Store. It’s free to download and use, and allows you to open projects created in any version of Dorico on iPadOS, macOS or Windows. You can edit projects with up to two players (four if you sign in with your Steinberg ID), and open projects with a larger number of players in read-only mode, making Dorico for iPad a handy reader for Dorico projects. If you want to get the most out of the app, consider the optional in-app purchase: for just $3.99 per month, or $39.99 per year, you can edit Dorico projects with any number of players, and also enjoy many features that are only available with subscription. These include support for freehand annotations with Apple Pencil in the Read view, support for third-party AUv3 instruments and effects, graphical editing tools in Engrave mode, and many more besides.

The team is already hard at work on the next set of updates for Dorico across iPad, macOS and Windows. We are planning to introduce further support for iCloud, so that you will be notified if you are working on the same project in your iCloud Drive on multiple devices, to avoid inadvertently overwriting a newer version. We also continue to work hard on reinstating the last few missing pieces in Play mode, and both the iPad and desktop versions of Dorico will soon benefit from the new dynamics editor, and further quality of life improvements to the existing piano roll, velocity and MIDI continuous controller editors.

In the meantime, find out why Dorico for iPad is the highest-rated music notation and composition app available on the App Store, and try it for yourself – download it from the App Store today. Thanks for using Dorico for iPad, and we look forward to bringing you further exciting improvements soon.