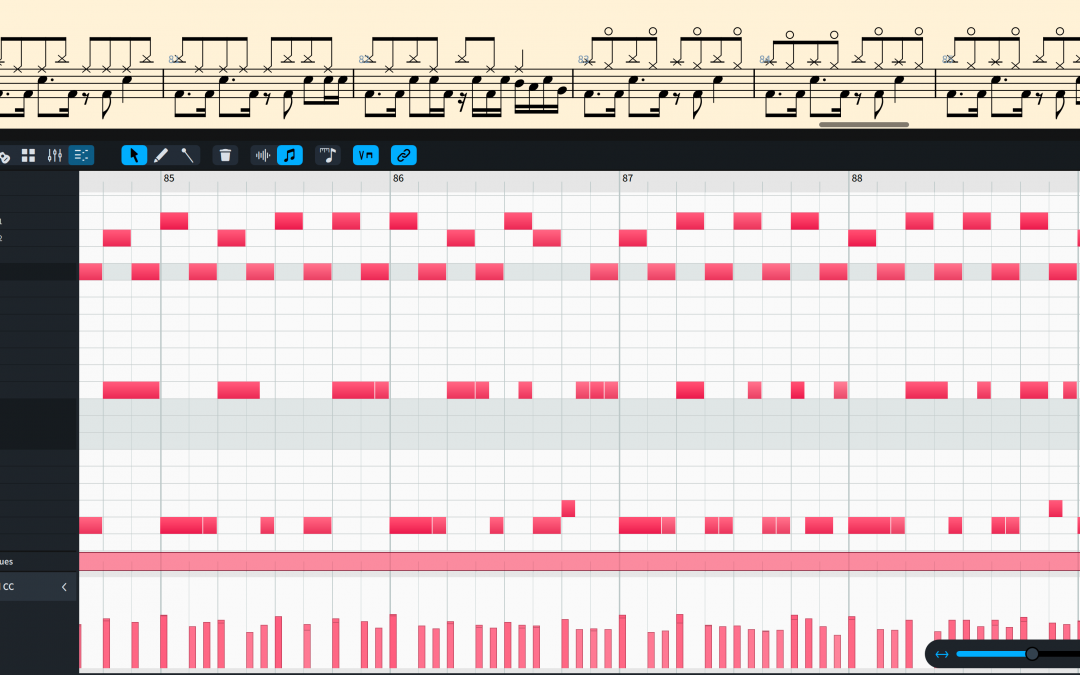 Only three weeks after the Dorico 4.1.10 update, we’re back again with Dorico 4.2. This update represents another big step forwards for the new Key Editor, with the reintroduction of the percussion editor, and some important improvements to the way the Key Editor follows the selection in the music area in linked mode. And of course there is the usual clutch of bug fixes and other minor improvements. Let’s dive in.

As usual, my honey-voiced colleague Anthony has a brief introduction to the main new features in this update:

Dorico 3.5 had a useful percussion editor in Play mode, but it had a few problems that we wanted to address as we rebuild Play mode and its associated editors for Dorico 4 and beyond: firstly, it didn’t fully support multiple playing techniques for each instrument, so you couldn’t create (or even necessarily see) notes for different playing techniques; secondly, note durations were only displayed when the note is selected, making it difficult to correlate the display in the editor with the notated music; thirdly, although you could create notes individually with the pencil tool or with the drumstick tool, you could only create notes one by one, and it was impossible to take a note written for one instrument in the percussion kit and drag it to another instrument in the kit.

The new percussion editor in Dorico 4.2 addresses all of these shortcomings. Each instrument in the kit now shows a separate row for each mapped playing technique, making it easy to create (say) normal hits, or cross-stick or rim hits for a snare drum, or to easily write for open and closed hi-hats. Note durations are always displayed, so it’s easier to correlate what you see in the percussion editor with the music in the music area. And you can freely drag notes between instruments or between different techniques of the same instrument.

Beyond this, the drumstick tool has had a huge upgrade: you can click and drag across a row belonging to an instrument to input a stream of notes for that instrument in a single gesture. Click on any existing note with the drumstick tool to remove it – making it very easy to create complex patterns where individual notes drop out. You can also remove a stream of notes by clicking and dragging from an existing note instead of an empty part of the editor. And when the drumstick tool is active, each instrument in the kit can have its own grid resolution, so that when you click with the drum stick to add a note, or drag across a row, the created notes can have a different duration, say, on the kick drum and the hi-hat.

Just as with the introduction of the piano roll editor in Write mode in Dorico 4, which suddenly makes some kinds of edits that were previously awkward to achieve in the music area not only easy but natural, the new percussion editor could quickly become your favourite way to enter drum notation. It’s great fun to use, and we really hope you will get a kick (drum) out of it.

The idea behind linked mode in the Key Editor was a simple (and, we thought, good) one: to provide orientation as you work on your music, switching freely back and forth between the standard notation in the music area and the piano roll in the Key Editor, we would automatically keep one system’s worth of music in view, and adjust the horizontal and vertical zoom level to ensure this. If you then decide that you want to look at a different chunk of music, you can scroll away or change the zoom level, and Dorico will take that as a hint that you no longer want to follow the selection in the music area, thus deactivating the link.

This was a fine idea in principle, but in practice it has proven to be less helpful than we had hoped. In particular, the fact that the link is deactivated as soon as you scroll or zoom the piano roll quickly became annoying, and after interviewing a number of heavy users of the Key Editor, it became clear that we needed to make some adjustments.

In Dorico 4.2, linked mode no longer attempts to keep a whole system in view, it will never adjust the zoom level on its own (either horizontally or vertically), and it will not deactivate the link when you zoom or scroll the piano roll. Instead, as you navigate around the music, Dorico will move the piano roll to bring the selection into view, and the movement uses a smooth scroll so that you can tell the direction in which you have just moved. If you want to deactivate linked mode, you can, but our hope is that you will find this overall a much more comfortable way to work. Certainly our beta testers have found it to be a big improvement.

We have also improved the reliability of mouse interaction with the Key Editor, so scrolling, panning and zooming all feel better than ever.

One more significant workflow improvement in this update is that data you have entered in the Expression and CC section of the Key Editor, such as MIDI CC data and edits to dynamics, are now copied and pasted when you copy and paste the music. Whether you use regular copy and paste with Ctrl+C/X/V, or you use R to repeat the selection, or you use Alt+click, any automation data within the ranges of the selected notes and rests will be copied and pasted along with the notated material. You can even use Move/Duplicate to Staff Above/Below. The only exceptions are Explode and Reduce, which don’t currently take automation data with them, but we are thinking about whether and how to address this in future.

If you are using independent voice playback, you will also find that moving notes from one voice to another on the same instrument will also now move associated automation data to the new voice.

All in all, you should find it much easier to keep the nuances of performance and expression that you craft in the Key Editor with your music as you continue to develop it. We plan to introduce further ways of copying, pasting and otherwise working with the data in the Expression and CC section of the Key Editor in our next feature update at the end of the summer, so stay tuned for more details in due course.

Dorico 4.2 also includes some incremental improvements to the handling of hanging punctuation for lyrics (first introduced in Dorico 4.1), and handles user project templates better – it now won’t reset the music and text fonts specified in your templates if you create them via the Create New page of the Hub. It also includes more than 30 bug fixes, including an important fix for a problem that could cause Dorico to hang when using certain combinations of VST plug-ins and MIDI devices, and once more allows you to drag and drop .doricolib files in the Library Manager to specify them as the source library.

To read about all of the other changes in this update, please refer to the Dorico 4.2 Version History PDF.

Assuming you already have an earlier version of Dorico 4 installed, you can update to Dorico 4.2 free of charge. First, quit Dorico and any other Steinberg application that you are running on your computer. We recommend that you run Steinberg Download Assistant, which will automatically update Steinberg Activation Manager to the latest version, along with any other elements of the Steinberg run-time environment (including eLicenser Control Center and Steinberg Library Manager) that may be outdated on your computer.

Once Steinberg Download Manager has finished updating any required components, go to My product downloads in the left-hand list, where you will find Dorico Pro 4, Dorico Elements 4, or Dorico SE 4, depending on which product you have installed. Select this, and on the right-hand side you will see Dorico 4.2 Application Installer. Click the Install button immediately to the right. This will download and run the Dorico 4.2 installer.

As we approach the dog days of summer here in London and Hamburg, we are continuing to work on Dorico 4, and we have one more update with significant functionality planned for the early autumn. With one very small exception, all of the functionality that was present in Dorico 3.5’s Play mode and piano roll editors has been reinstated in the Key Editor in Dorico 4, with a number of significant improvements already incorporated. We have made great strides with the functionality and usability of the new Key Editor, but there is still more work to do in polishing it and ensuring that it provides a really smooth and powerful workflow, and the next update will take it to the next level. We have also been working on a really great feature to help arrangers, which has been in the works now for a long time, and all being well we hope it will be included in the next update.

We recently updated Dorico for iPad to version 2.4 to address the issues some users have been experiencing with working with projects in iCloud Drive, and we anticipate another minor update in the near future to address one remaining issue with that update. If you’re interested in taking advantage of the Lifetime Unlock in-app purchase that will provide you with permanent access to all current and future subscription-only premium features with a single payment, that’s on sale at a 30% discount until 28 July 2022 as part of the Steinberg Summer Deals promotion.

If you’re still on the fence about Dorico 4, now’s a great time to get on board. Dorico 4.2 is the seventh update to Dorico 4 and we’ve addressed a lot of issues and added a lot of new functionality since the release of 4.0 in January. Check out the Summer Deals post for direct links to buy at a special price – but don’t waste any time, as this promotion will end on 28 July 2022.