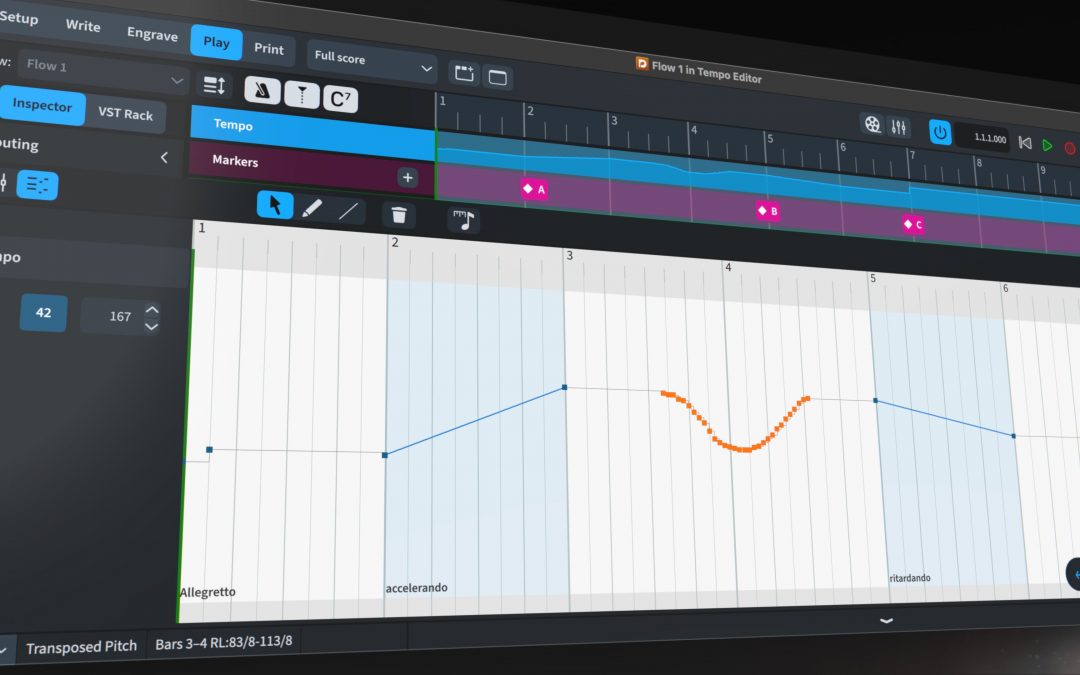 Following hot on the heels of the Dorico 4.0.20 update just three weeks ago, we are pleased to announce the immediate availability of Dorico 4.0.30, a third maintenance release for Dorico 4 since its release in January. This update fixes a serious performance problem that affects users who have a very large number of VST plug-ins installed on their systems, and also reintroduces the tempo editor in the Key Editor, restoring one of the Play mode editors that have been missing from the brand new implementation of Play mode in Dorico 4.

We are pleased to be able to reintroduce the tempo editor in Dorico 4.0.30. To use it, first ensure the Key Editor is shown in the lower zone. In Write mode, if linked mode is activated for the Key Editor, selecting a tempo marking in the music area will show the Tempo editor in the lower zone; in Play mode, you can simply select the Tempo global track at the top of the track overview. The new Tempo editor should feel very familiar, as it is functionally identical to the corresponding editor in Dorico 3.5 and earlier versions.

This release also includes a few nice improvements to the Hub window. Firstly, the Learn button will now show a badge to let you know that new items have been posted here to the Dorico blog or to the Dorico YouTube channel. This should help you to keep track of new releases, #TipsTuesday tutorials, and our regular live stream videos.

Secondly, you can now use the up and down arrow keys to hop the selection through the list of recent projects on the Open Recent page, and use Return or Enter to open the highlighted project.

Finally, it’s also now possible to toggle between the default grid view and a list view similar to how the Hub appeared in Dorico 3.5 and earlier versions, so if you prefer to see just the name and path of each recent project rather than a preview, this is the option for you. Dorico will remember your choice and default the Hub to your chosen view type each time you start the application.

This release also brings a couple of small engraving improvements. Firstly, a new option has been added to the Staff Labels page of Engraving Options to allow you to specify that short instrument names should always end with a period. Dorico has always used the convention that a period or full stop should only be added to the end of an abbreviation when the last letter of the abbreviation is different than the last letter of the full word; so, for example, “Violin” is abbreviated to “Vln” with no period, but “Violoncello” is abbreviated to “Vc.” with a period. However, another commonly-used convention is that an abbreviated name should always be followed by a period, regardless of the last letter of the abbreviation; so “Violin” would be shortened to “Vln.” with a period. If you prefer this convention, it’s now possible to choose by setting Period (full stop) after abbreviated instrument names to Always add period.

Secondly, additional control has been provided for the appearance of barlines when a start repeat barline coincides with the start of the system: by default, Dorico shows a normal barline at the end of the previous system, but you can set Barline at end of system coinciding with start repeat to Double barline if that is what you prefer. However, the disadvantage of this option is that it applies to all such situations throughout the project. Dorico 4.0.30 introduces a new property, Barline at end of system, which only appears when a start repeat barline is selected: you can activate this property and choose any of Dorico’s supported barline types (except for repeat barlines) to appear at the end of the system. This property also takes effect in the situation where a start repeat barline coincides with a change of key signature in the middle of the system, and allows you to override the default appearance of the standard double barline that precedes the key change there if necessary.

This update also includes a number of bug fixes, including an important fix for users who have many VST plug-ins installed on their system: Dorico was needlessly rebuilding the lists of plug-ins that appear in the Mixer and in the VST Rack in Play mode after every edit to the score, resulting in a noticeable delay on systems with hundreds (or more) plug-ins installed. Full details of all of the fixes included in this update can be found in the Dorico 4.0.30 Version History PDF.

Once Steinberg Download Manager has finished updating any required components, go to My product downloads in the left-hand list, where you will find Dorico Pro 4, Dorico Elements 4, or Dorico SE 4, depending on which product you have installed. Select this, and on the right-hand side you will see Dorico 4.0.30 Application Installer. Click the Install button immediately to the right. This will download and run the Dorico 4.0.30 installer.

(Unlike with previous versions of Dorico, there is no longer a separate updater installer: you can simply run the Dorico 4.0.30 installer to update your existing Dorico 4 installation, rather than using a separate installer.)

We had hoped to have another update to Dorico for iPad ready to go today as well, but due to some unforeseen technical difficulties that release has been delayed, though we hope not for long. This release will include support for Open in Place, which means that it will be possible to open Dorico projects directly from iCloud Drive, Dropbox, OneDrive, or other cloud storage apps, and save those projects directly back to those locations. It will no longer be necessary to use the Share button on the toolbar to export the project back to that location. This should make it much more convenient to work with projects across multiple devices.

We are also continuing to work on our next update to Dorico 4, which will be available a little later in the spring. This is planned to include the remaining missing editors in the new Key Editor, together with some further improvements to the user experience of the new tools, and we also anticipate adding iCloud support to both Dorico for macOS and Dorico for iPad.

In the meantime, I hope you continue to enjoy using Dorico 4, and I’ll be back again soon when the new Dorico for iPad release is available.