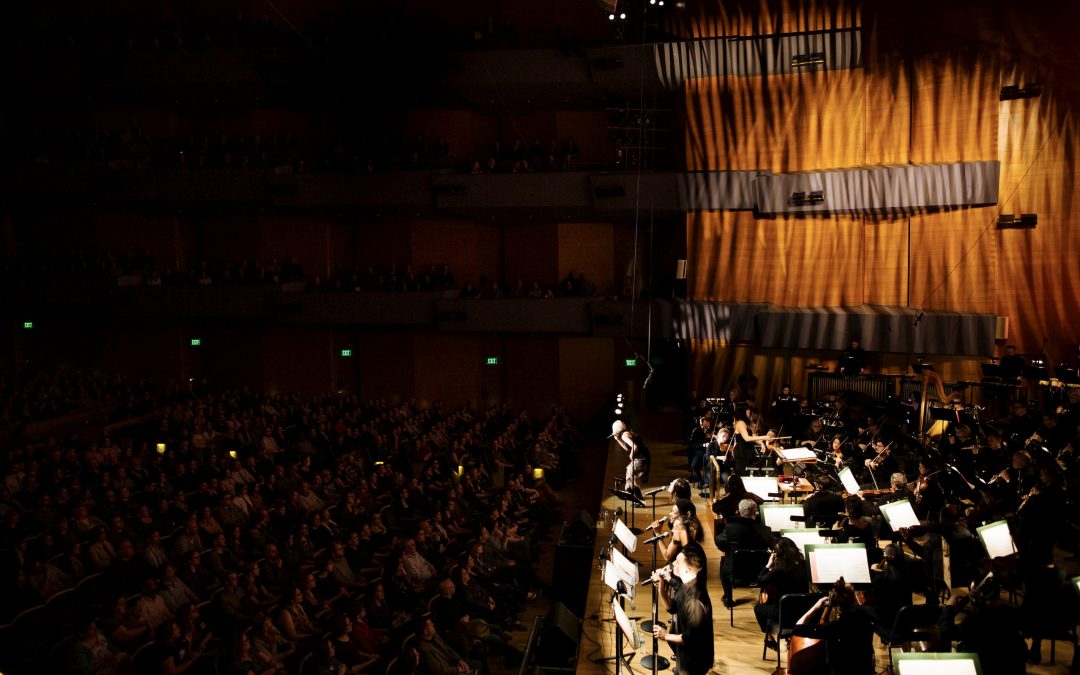 On 8 November 2019, a unique new album that marks a collaboration between writer, singer and hip-hop artist Dessa and the Minnesota Orchestra called Sound the Bells will be released on Doomtree Records, the label of the indie hip-hop collective of which Dessa is a part. Recorded live at Orchestra Hall in March 2019, the album sees Dessa take to the stage with a 73-piece orchestra under the baton of conductor Sarah Hicks. One of the key movers and shakers behind this project is Dessa’s long-time collaborator, producer and arranger Andy Thompson, who took on the mighty task of producing the new arrangements in Dorico. I recently had the chance to chat to Andy in the run-up to the release of the album.

Doomtree has been active since the early 2000s and although its membership has changed over the years, and Dessa joined the collective almost by chance after discovering that she lived down the street from fellow member P.O.S. Dessa started out as a writer and came to hip-hop through slam poetry. She has appeared on every one of their albums, and was even for a time CEO of the group – something she describes as “managing Microsoft Excel documents sometimes, and book hotel rooms, which is important, so we don’t have to sleep outside” – before stepping down in order to focus on her rapping and singing. Dessa’s career is incredibly diverse and vibrant, taking in not only her musical projects but also writing (she penned a memoir, My Own Devices, that was published in 2018) and other entrepeneurial enterprises (she has partnered with a local distillery to produce her own Bourbon whiskey).

Dessa has performed with the Minnesota Orchestra before, with sold-out concerts in 2017 and 2018, and accompanied the orchestra on tour to South Africa in 2018, but adding a live album recording to the mix took the endeavour to a new level. Months of work went into preparing for the March recording of the album, with arrangements produced well in advance so that they could be handed over to the orchestra’s librarian in good time. The man charged with producing those parts is producer and arranger Andy Thompson, who has worked with many luminaries of the music world – not only Minnesota mainstays like Dan Wilson of Semisonic and Jeremy Messersmith but also artists as diverse as Belle and Sebastian, Jason Mraz… not to mention that he played keyboards and guitar on Taylor Swift’s album Red in 2012.

To read more about preparation for the concert, check out Chris Riemenschneider’s in-depth article for the Star Tribune, Dessa’s Big Score. One passage that jumped out at me:

At one point, Dessa — who spent the past decade normalizing the phrase “female rapper” in the notoriously macho hip-hop world — pointed out another unique trait of this project: its feminine DNA makeup. Besides the headliner, conductor and vocal arranger, all but one of the principal string players were women. So you could have bet your copy of Dessa’s empowering 2018 memoir My Own Devices that feminism would also play a thematic role in the performance. There was even an homage to Ruth Bader Ginsburg.

To find out more about the project, I caught up with Andy to ask him about his involvement and how Dorico played its part. 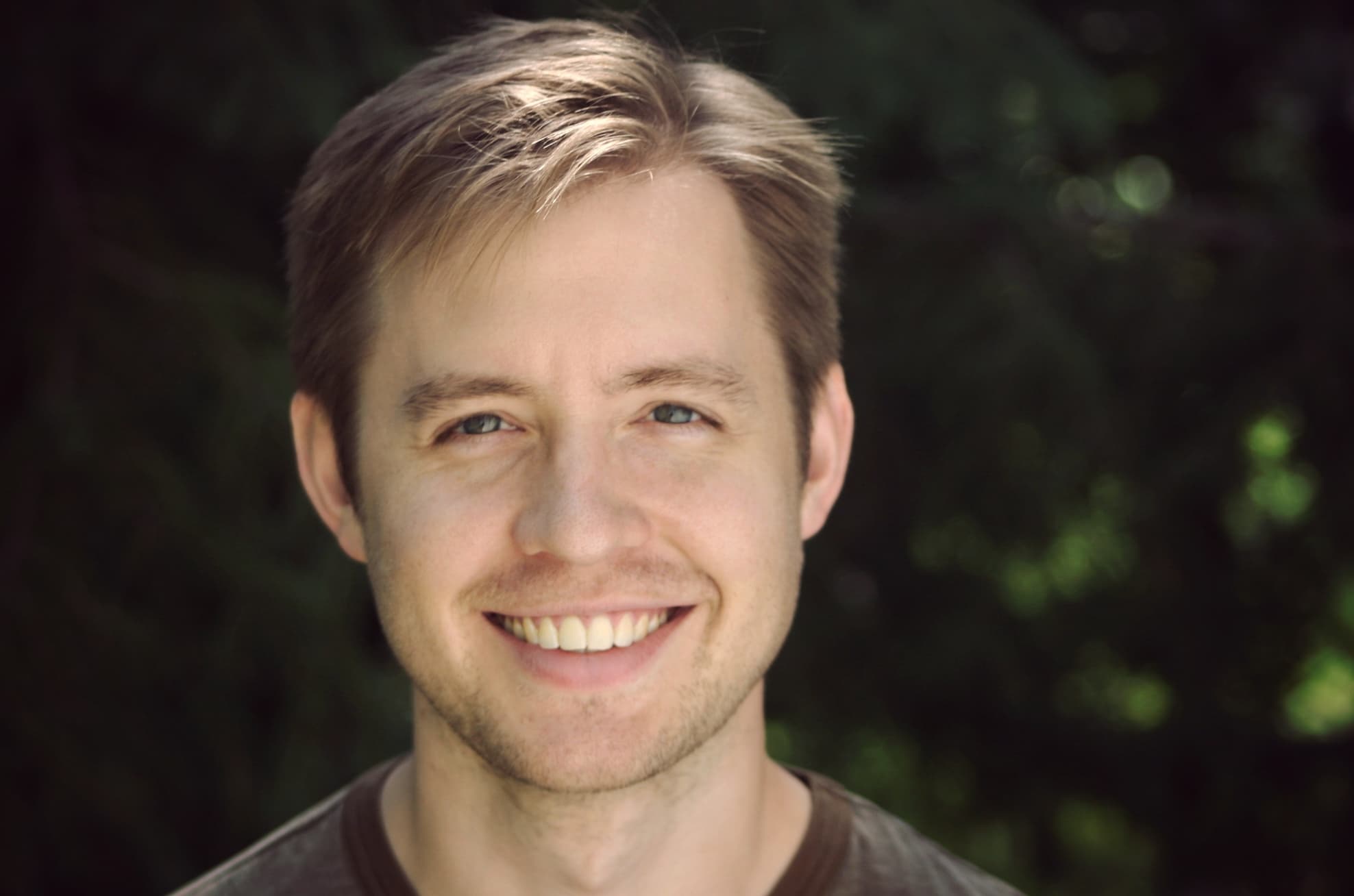 DS: You’ve worked with some very eclectic artists before Dessa. How did you come to work with her?

AT: Minneapolis has a very vibrant music scene, with a surprising amount of cross-pollination between musicians from different genres. So even though I was coming from an indie rock and classical background, and Dessa was coming from the spoken word and hip-hop side of things, we had a bunch of friends and musical colleagues in common over the years. A choral project popped up that she needed some arrangements for, and my name came up through the grapevine as someone who could write for classical ensembles but had an ear for pop music. We ended up hitting it off as collaborators.

DS: I would guess Dessa hasn’t had the chance to work with a 73-piece orchestra before. Were there any special challenges in shaping the arrangements for her?

AT: You’re right! This was a first. And yes, this project was full of challenges—starting with the fact that there is not a ton of precedent for musical excursions of this exact type. One thing Dessa and I knew from the get go was that we didn’t want the show to be “Dessa and her usual backing band with some string players sawing away anonymously behind her”—we wanted to take full advantage of the orchestral players, their personalities, and the ludicrously high level of musical skill at hand. At the same time, we wanted the music to hit hard and have some of the same swagger as a good rap show. If we were able to pull that off, we hoped everyone involved—the players, our conductor Sarah Hicks, fans of Dessa and fans of the orchestra, ourselves—would feel challenged and have fun. 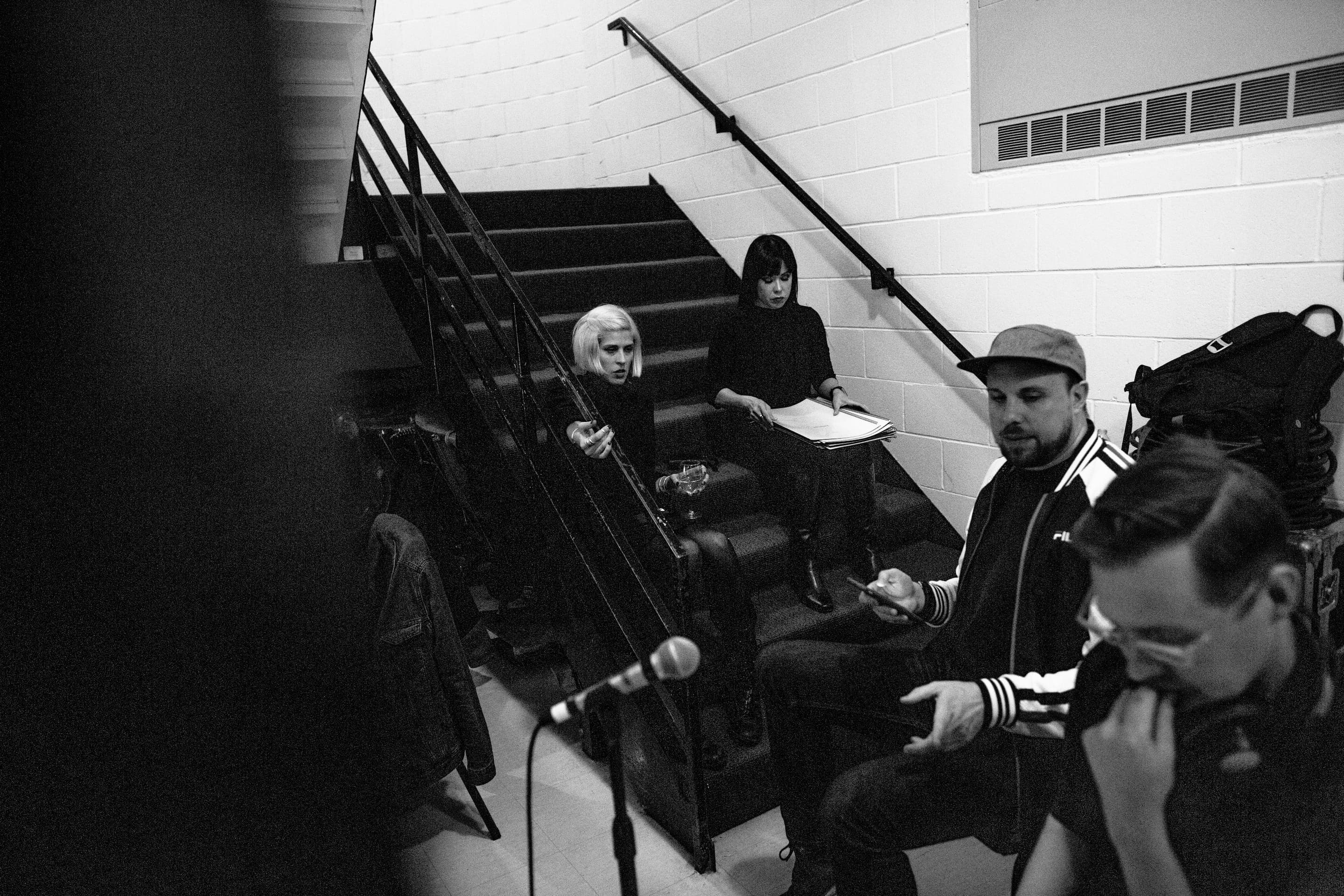 To get there, we ended up stripping away practically everything Dessa normally does in her live performance, then built the songs back up from the ground level with the orchestra first and foremost in our minds. This approach gave us tremendous freedom, and a fair amount of the material ended up not just re-orchestrated, but totally re-imagined in this new context. Of course, the approach also brought with it big risks, starting with the sheer amount of new musical material and the limited time we had to rehearse. Luckily everyone was game, dug in hard from the first downbeat, and we were able to create a little magic together. 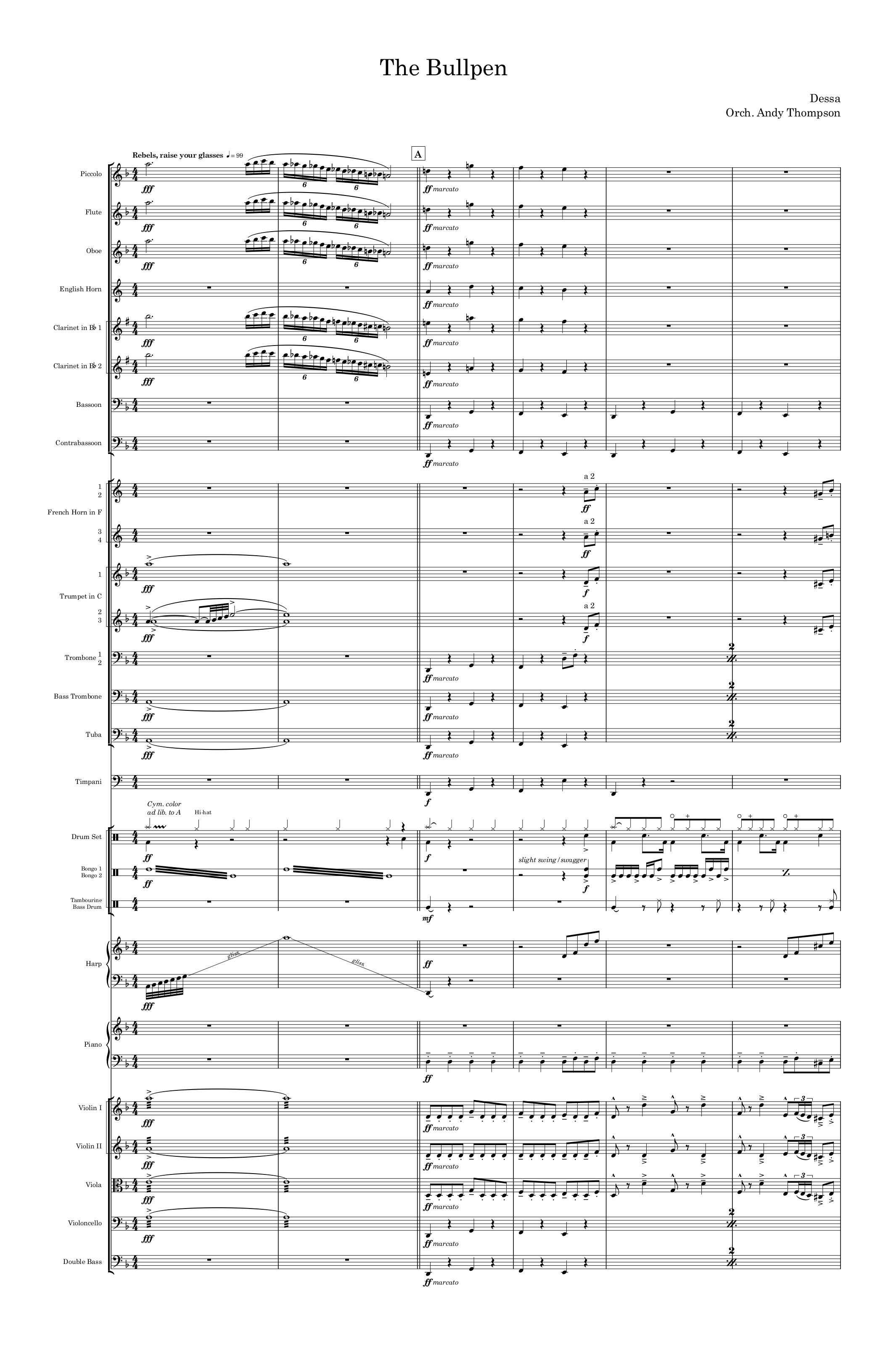 DS: You switched from your previous notation program to Dorico in the middle of producing the arrangements for this live recording, which was brave! What was it that made you switch?

AT: Up to that point I had dipped my toes in Dorico on a few smaller projects—string quartets, lead sheets, a brass quintet. I wasn’t expecting to be able to make the jump to a full orchestral project so quickly, but the workflow just clicked with me, and I ended up feeling shockingly comfortable using the program after just a week or so. Add to that the time saved on the backend of score and part prep—not to mention the stunningly beautiful output—and I found myself with enough confidence in Dorico to make the leap mid-stream.

DS: Were there any features in Dorico that were particularly helpful in getting the arrangements finished on time?

AT: With my previous software, even though I had a reasonably bulletproof template to work from, I still had a long “preflight” checklist that I needed to run down before submitting a score and parts for printing: Double-checking fiddly things like instrument changes, page margins, percussion labels, title page formatting, brackets, cues, line collisions, staff spacing, etcetera. That part of the process was a mind-numbing, creativity-killing slog, and always felt like a waste of time—or money if I was paying someone else to do it. At the same time, it was a hugely important step, as even a small error in, say, the placement of a cue or a percussion instrument label can grind a rehearsal to a halt. Dorico solves all of these pain points. Not only that, it does it by building the solutions into the foundation of the software: Master pages, players, flows, percussion kits, dynamic cues, and layouts all set the user up with projects and scores that are easy to create, manage, and manipulate. It’s beyond refreshing.

DS: Thanks so much for sharing your story with me, congratulations on a very successful live recording, and best of luck with the release of the album!

The cover of Dessa’s album with the Minnesota Orchestra, “Sound the Bells”.

If you want to find out more about Dessa, a multi-hyphenate artist if ever there was one, visit her web site. If you’d like to preorder Sound the Bells, you can do that via label Doomtree Records’s web site, where you can also read more about this remarkable project. To find out more about Andy Thompson and the many incredible projects he’s worked on, you can find his home on the web at andywho.com. If you’ve not tried out Dorico for yourself, the 30-day trial version of the brand-new Dorico Pro 3 will be available on 8 October, and you’ll be able to download it here.