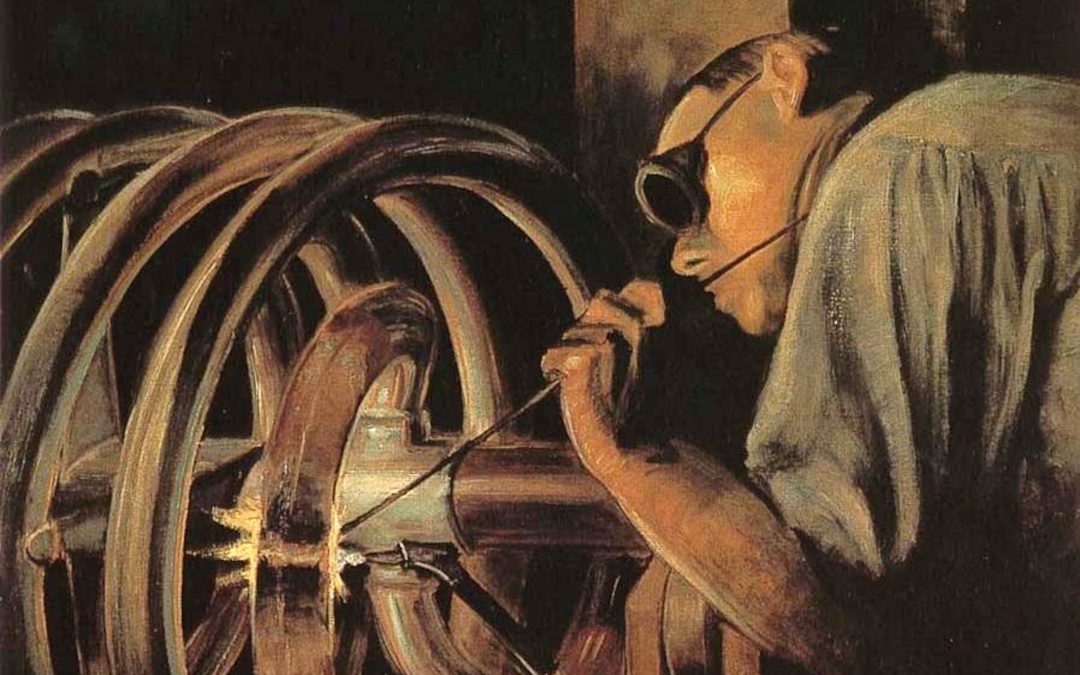 This April three brand new single-act operas will be premiered at the Cedar Rapids Opera Theatre in Cedar Rapids, Iowa as part of a special event called Strokes of Genius, celebrating the life and work of the iconic Iowan artist Grant Wood, whose most famous painting, American Gothic, has become the defining image of the American Midwest in the early part of the twentieth century.

Wood became the de facto spokesperson for the movement known as Regionalism, which celebrated the character and culture of regions of the United States, most prominently the Midwest and the Deep South. Before American Gothic propelled him to national and international fame, Wood travelled to Europe in the 1920s, visiting the museums of France and Italy, studying at the Académie Julian and exhibiting his work in Paris.

I spoke to composer Jean-Francois Charles about his new opera, Grant Wood in Paris, and how it represents his own creative response to the art and life of the famous painter and educator.

Jean-Francois Charles creates at the crossroads of music and technology, as in the collaborative soundtrack to Dziga Vertov’s movie The Eleventh Year (with Nicolas Sidoroff and four other musicians, 2015) or in his musical chemistry work with scientific glassblower Benj Revis (Aqua ignis, 2018). As a clarinettist, he worked with Karlheinz Stockhausen for the world première of Rechter Augenbrauentanz (Stockhausen-Verlag CD #59). His recent album Electroclarinet was awarded prizes at the Global Music Awards in both categories Contemporary Classical Album and Composition/Composer. Since 2009, he has performed works from the Electroclarinet series in China, France, Finland, and the United States.

He studied at the National Institute for Applied Sciences (INSA) in Lyon, then at the Strasbourg Conservatory with the Italian composer Ivan Fedele and clarinettist Armand Angster. He earned his PhD in music/composition at Harvard, where he studied with Hans Tutschku, Chaya Czernowin, Julian Anderson, Michael Gandolfi, Helmut Lachenmann, and Gunther Schuller. His article A Tutorial on Spectral Sound Processing using Max/MSP and Jitter published in the Computer Music Journal has helped many electronic musicians integrate spectral sound processing into live performances, compositions, or their own software creations.

After serving as deputy director at the Montbéliard Conservatory then Brest Conservatory (France), in 2016 he joined the School of Music at the University of Iowa as Assistant Professor in Composition and Digital Arts.

DS: What can you tell me about the “Grant Wood Operas: Strokes of Genius” project?

JFC: The American painter Grant Wood is famous for American Gothic (1930) and other paintings depicting the rural American Midwest. After an idea from musical director Daniel Kleinknecht, the Cedar Rapids Opera Theatre has commissioned three Iowa composers each a one act opera based on the paintings of Grant Wood. The three operas will be presented together in one evening; they are going to be premiered in Iowa on April 12–14. We are very excited that Tripp Evans, author of Grant Wood, A Life, will give pre-opera talks before each of these performances.

DS: Is the music of your opera Grant Wood in Paris a response to Grant Wood’s art as much as his life experiences?

JFC: Yes, indeed. I wrote the libretto and the music in response to selected paintings and related aspects of the artist’s life. In The Coil Welder, Grant Wood sheds light on the nobility of the worker in action. When I saw this painting, I envisioned a musical workshop that would include farm and tool sounds. The opera starts at the death of Grant’s father, when he was just 10 years old. The second scene opens on an imagined party in Paris, after which Grant Wood meets the person he portrayed in The Spotted Man. In the third scene, Grant has chosen to come back to his native Iowa; he settles in a small apartment to live with his mother and sister. The tension between the life of a worker in Iowa and the Bohemian life in Paris in the 1920s lies at the core of Grant Wood in Paris. 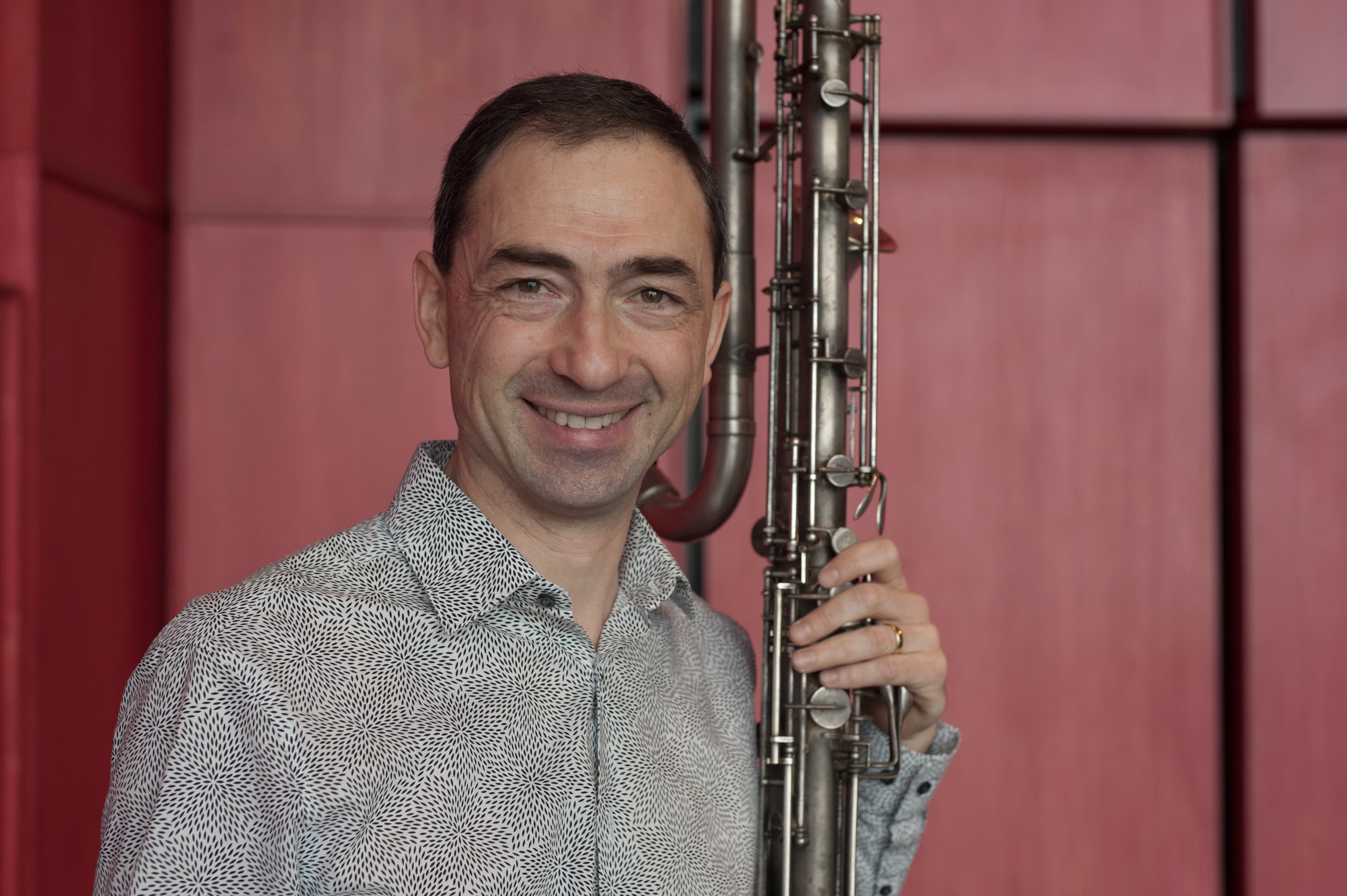 DS: Were there any features of Dorico that were particularly helpful in making the performance materials?

JFC: Several years ago, when I worked for composer and conductor Gunther Schuller, he taught me the importance of detailed and refined parts. With this in mind, features such as the numerous options for cues were quite helpful. I also appreciated the percussion options: I was able to notate the part with the flexibility I was looking for. Sometimes, I wrote classical percussion, in the same vein as The Soldier’s Tale; in other places, I came up with fully notated drum parts; yet at other moments, I used a quasi-big-band notation, with more space for personal improvisation and colors by the percussionist/drummer. But the most important point to me is the fact that Dorico inherits from publishing software such as Quark XPress. I really appreciate how Dorico handles layout and fonts. 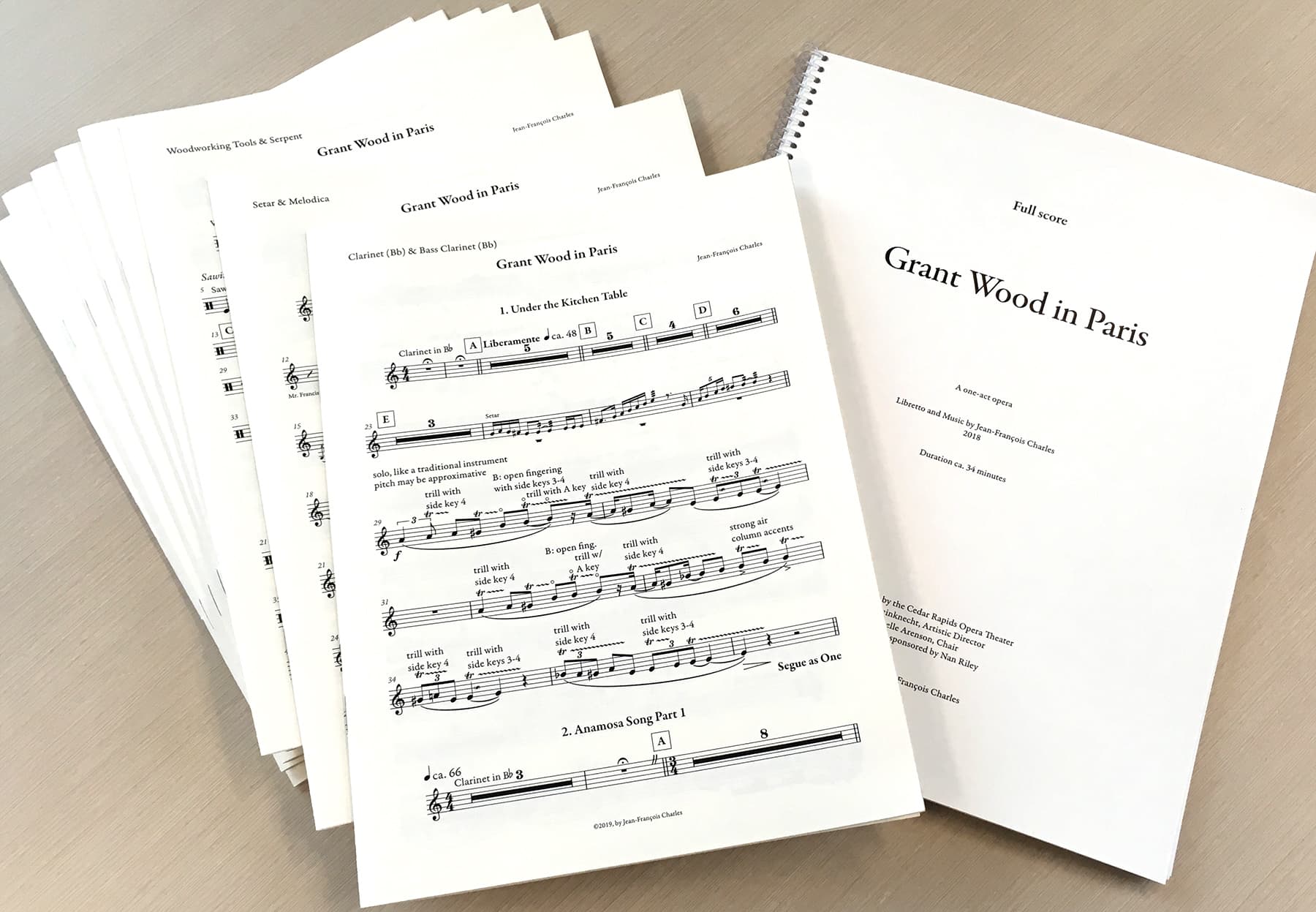 The performance materials for Grant Wood in Paris, made with Dorico.

DS: Do you already have a new commission or project in mind? What will you be working on next?

JFC: Along with talented colleagues of mine at the University of Iowa, we are preparing a Scientific Concert for the Fall of 2019. It will feature a composition for double bass and chemistry apparatus (Aqua ignis, 2018) as well as a new piece I’m writing for double bass, phonolites and a collection of stones, and live electronics (Magma Iowa). Guest speakers from the departments of Physics and Astronomy, Chemistry, and Earth and Environmental Sciences are going to participate in this evening of music and science.

DS: Thanks for taking the time to discuss your opera with me.

You can find more about Strokes of Genius at the Cedar Rapids Opera Theatre at their web site; at the time of writing, tickets are still available to hear these three single-act operas staged for the first time. To find out more about Jean-Francois Charles, visit his web site, and you can find out more about his award-winning album Electroclarinet at electroclarinet.com. And if you have an opera inside of you just waiting to be written, you can take Dorico for a spin for 30 days: find more details at our web site.