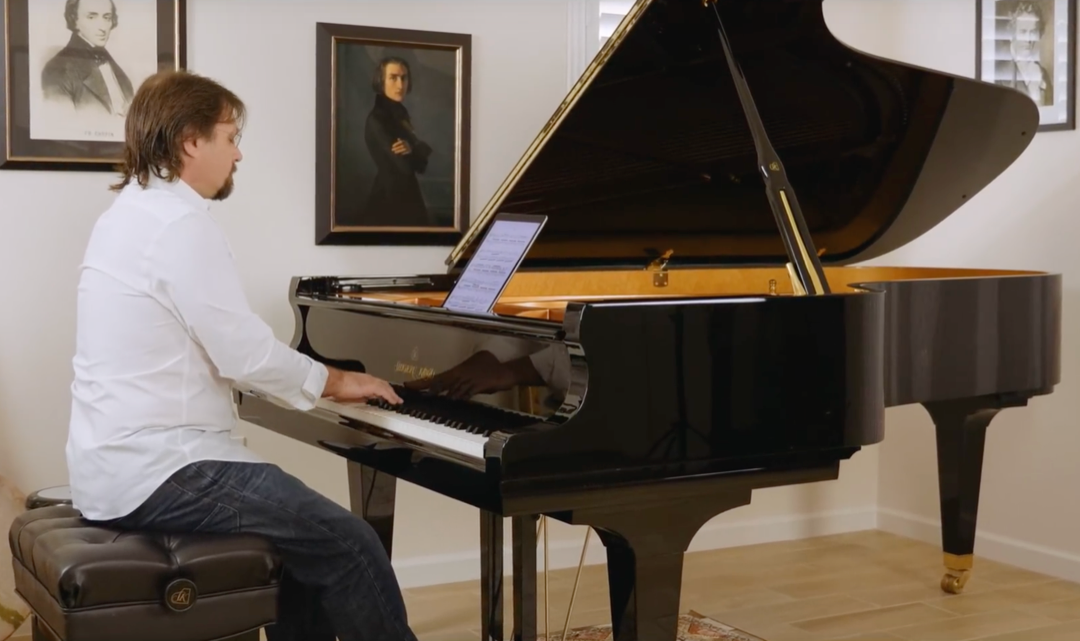 David Hicken is a true multi-hyphenate: an acclaimed organist and pianist – he is a Shigeru Kawai Artist – choral director, recording artist, composer… and that’s only a handful of his music-related titles. To that list you could also add teacher, since he has taught both music and scuba diving, in an extraordinary life that has taken him from Shropshire in England’s West Midlands to both coasts of the United States, to Thailand, Sri Lanka, and beyond. Now settled on the Hawaiian island of O’ahu, David has been working on albums of solo piano music for several years, and has just released his ninth album of piano solo music, Transitions, composed in Dorico.

David was born into a musical family, and learned a great deal at the knee of his pianist mother and singer father, becoming an accomplished organist and pianist by his teenage years. He won a scholarship to the prestigious Peabody Conservatory of Music in Baltimore, Maryland, in the United States, and then headed west to Los Angeles, where he was appointed director of music at the Church of the Good Shepherd in Beverly Hills. While living in California he discovered a passion for scuba diving, and abandoned his musical career to embark on a new career as a dive instructor, a career which took him to Thailand and Sri Lanka. He eventually found his way back to music as a profession when he returned to the US and moved to Hawaii, where he started taking piano students, and eventually took a teaching position at a girls’ school on the island. With his new home overlooking the Pacific ocean, David found himself inspired to start composing, and after producing a series of albums for solo pianos, achieved something of a viral hit with his arrangement of The Carol of the Bells, which has been viewed more than 4.5 million times on YouTube!

I recently talked to David about his composing process and how moving from Sibelius to Dorico has helped his creativity.

DS: Tell me about Transitions.

DH: Transitions was composed over a period of seven months using Dorico. Having been a Sibelius user for many years, I was happy to make the switch to Dorico, which made entire process easier and more enjoyable than in previous projects. Each piece began as a blank slate, and I liked the fact that in Dorico I was able to start writing immediately without having to determine key and time signatures. Working on my laptop allowed easy entry of note values without the need for an extended keyboard, something that was always necessary for me in the past.

DH: I was impressed by how great the music looked as soon as it was entered, thanks to the Bravura font, and more importantly, the formatting worked perfectly with very little editing necessary on my part. In the past, I constantly had to make changes to the layout of my pieces to make them more legible, but Dorico automatically adjusts everything correctly which saved me a lot of time. Pedal markings line up beautifully without any tweaking, and finger numbers appear exactly where I need them, especially when working with multiple voices. 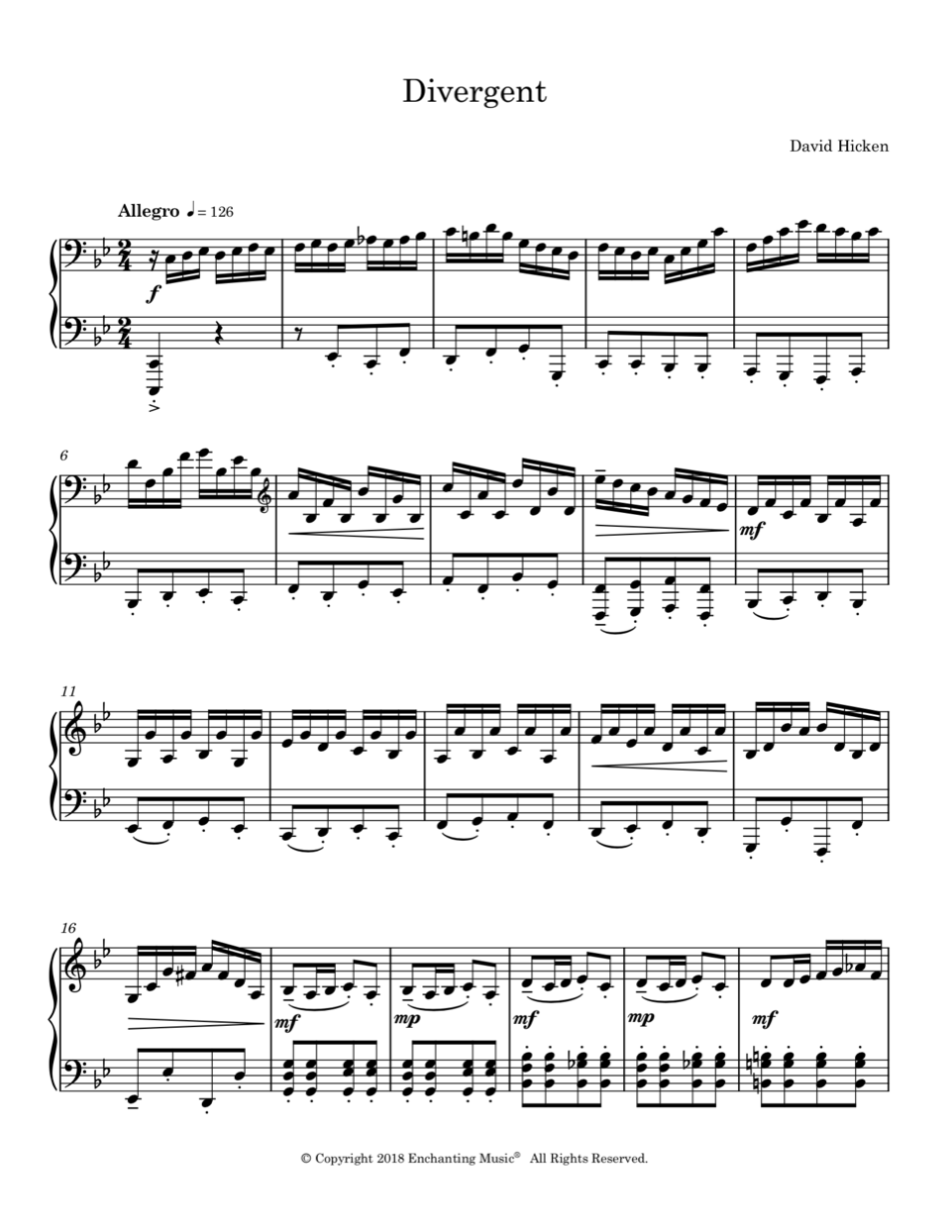 The first page of “Divergent”, from David Hicken’s “Transitions”.

DS: Music for piano is often complex, and looking at the sheet music book for Transitions you are certainly making use of the full range of notations that are idiomatic to keyboard writing.

DH: My piano music uses a lot of cross-staff beaming, and in previous projects I often needed to edit the distance between staves, as well as alter the direction of beams, but once again, Dorico gets it right immediately and the results look fantastic. I write contrapuntal pieces which require the use of multiple voices, and I like the ease with which Dorico allows me to create new voices as well as switch between them. The “voice colors” feature is very helpful to see exactly what is happening with each part.

DS: How did you find learning Dorico, coming to it from using Sibelius for many years?

DH: Popovers are one of my favorite features of Dorico, and have saved me a lot of time. It’s great to be able to type in dynamics, tempo markings and playing techniques in such a way that the program understands exactly what I require. Engrave mode is easy to use, and very helpful when an item needs to be moved without worrying about changing any of the actual music. Frames are simple and intuitive, and allowed me to easily add copyright information, subtitles, logos, front matter, as well as front and back covers for the completed book. 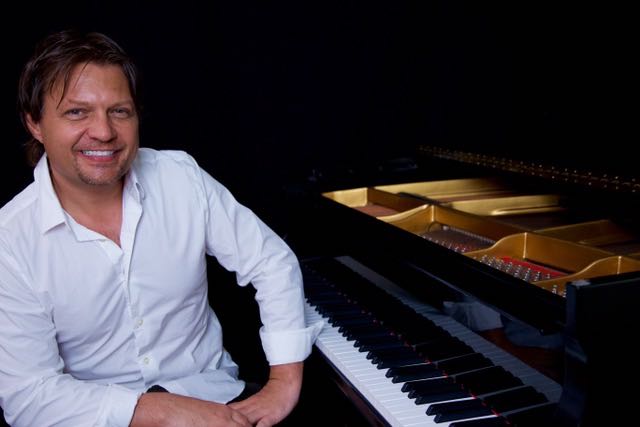 David Hicken at the piano.

DS: So you assembled the whole book directly in Dorico? That was certainly one of our aims when we designed the functionality of Engrave mode, working with multiple flows, and so on.

DH: Assembly of the book was very easy because of flows. I imported all twelve pieces as separate flows into one project, and was able to easily change the order of pieces by dragging flows to their respective positions, which automatically adjusted page numbers and retained the formatting of titles, headers and footers. In fact, the process was so quick and easy that I found myself saying, “is that it?”

DS: I’m delighted that Dorico has helped you to produce your latest album, and I hope it will help you to create many more.

DH: Dorico has improved the way I work, and I find that it is a wonderful companion in the composition process. It has been created by a wonderful and talented team of people who obviously care about what their users have to say, and I look forward to watching the software continue to evolve.

DS: Thanks for your time, David!

If you would like to find out more about David’s music, visit his web site, or check out his YouTube channel. You can buy his albums, and purchase PDFs of the sheet music, at his online shop. If you’ve not tried out Dorico for yourself, you can download a fully-functional 30-day trial version absolutely free.