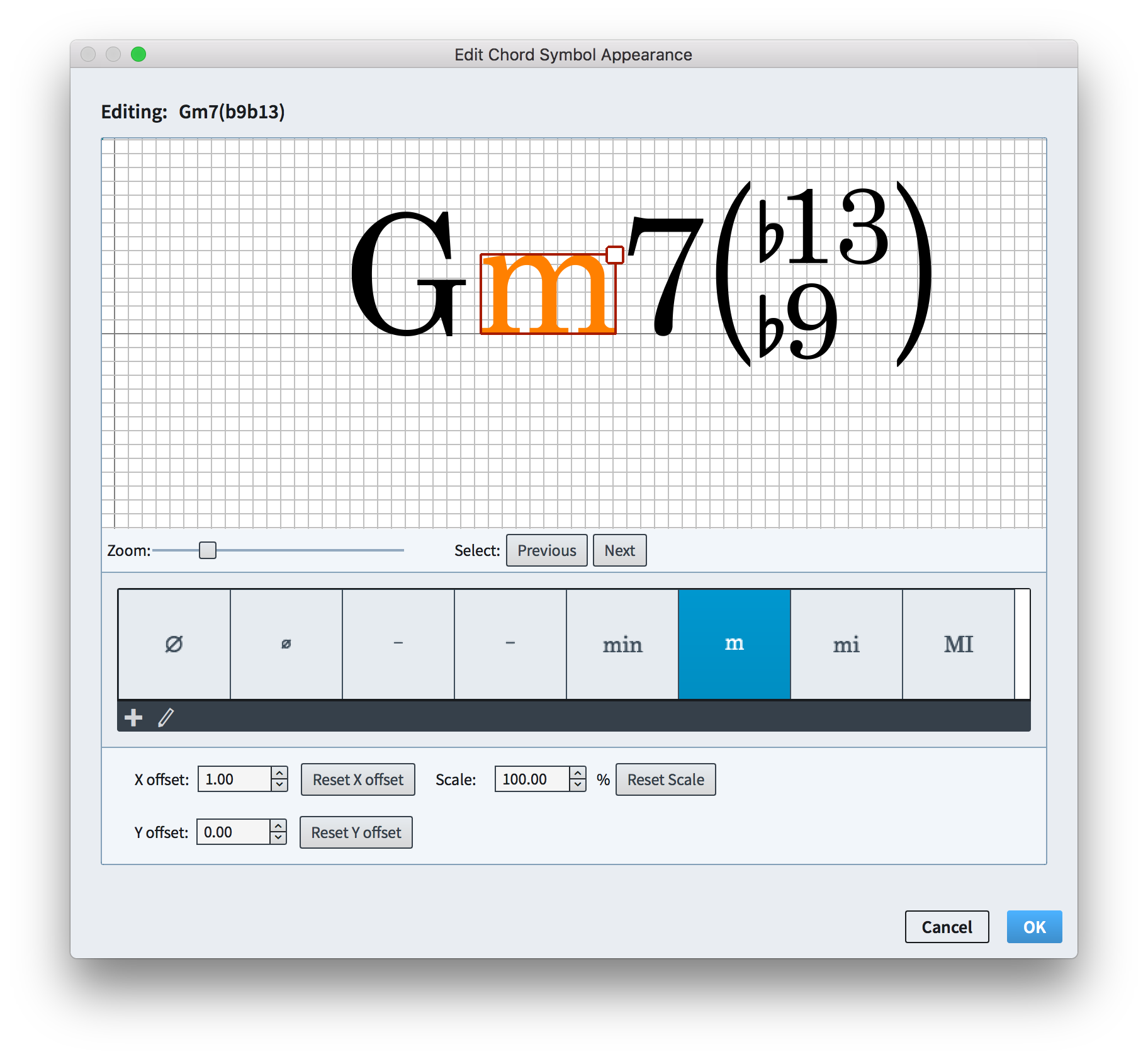 We have today released Dorico 1.1.10, the latest update to our professional music notation software, following hot on the heels of the Dorico 1.1 update that was released at the end of June.

The main focus of this update is to add graphical editing of individual chord symbols in Engrave mode, which was something that was planned for Dorico 1.1 but which needed a bit more time to get into shape. In addition to that significant bit of functionality, there are a few other minor functional improvements, and the usual crop of bug fixes. Read on for more details.

As always, my colleague Anthony has prepared a video that walks you through the new functionality provided for editing chord symbols in Engrave mode. Sit back and enjoy.

Before you start editing individual chord symbols, or even editing the default appearance of specific chord symbols, you should first take a close look at the options on the Chord Symbols page of Engraving Options to make sure that your preferred appearance isn’t already available.

The kinds of situations in which you might find it necessary to override the choices made in Engraving Options are for things like particularly tight rhythmic spacing, or an unusually fast harmonic rhythm that requires a higher density of chord symbols just for a few bars, and in order to make the chord symbols fit without too much compromise of the rhythmic spacing, you want to make some small adjustments to some of the chord symbols in order to conserve horizontal space.

To tighten up a chord symbol in order to make it use less horizontal space, you might nudge each component closer to the root, or perhaps even make some components slightly smaller than normal.

Once you’re satisfied with the look of the chord symbol, click OK to confirm your edits. If you later want to revert the chord symbol back to its default appearance, you can choose Edit > Reset Appearance.

You can also edit the default appearance of a particular chord symbol via the new Project Default Chord Symbol Appearance dialog, which is accessed by clicking the Edit button at the very bottom of the Chord Symbols page of Engraving Options. This dialog is functionally very similar to the editor for individual chord symbols, but with additional controls that allow you to specify which chord symbol to edit.

Enter a chord symbol into the edit control at the top left-hand corner of the dialog in the same way that you would input it using the Shift+Q popover, e.g. type Gm7b5 or Cm7(b9). The chord symbol then appears in the editor, and once you have made changes to it, all subsequent instances of that chord symbol in your project (unless they have been edited individually in Engrave mode) will now assume the new appearance. Do be aware that if you want to make a change to all chord symbols of type e.g. m7b5, you will have to specify a default appearance for that chord symbol on every root note, e.g. Cm7b5, C#m7b5, Dbm7b5, Dm7b5, and so on: each default that you create is for a single type of chord symbol, including its root note.

Full documentation for the chord symbol editors and the other improvements to chord symbols in Dorico 1.1.10 can be found in the version history PDF.

There are some important bug fixes for playback of playing techniques (though a lot more remains to be done in this area), and a couple of modest but significant improvements in the handling of tempo changes: firstly, you can now specify the final tempo for a gradual tempo change using the Final tempo % property in the Properties panel; and secondly, gradual and relative tempo changes now play back correctly in time signatures where the beat unit is something other than a quarter note (crotchet).

We have also reinstated the option to export audio in MP3 format, which was erroneously removed in Dorico 1.1.

Dorico 1.1.10 now includes a small set of example projects that will appear in the Steinberg Hub when you run Dorico for the first time. If you’re giving the trial version a whirl, then you’ll see them the first time you run after installation, but if you’ve already been running Dorico for a while, then you won’t see them unless you go looking for them.

One of the works that is included is Au Tombeau de Rachmaninoff by the Russian pianist-composer Vladimir Drozdoff (1882–1960), engraved by Vyacheslav Gryaznov and to be published later this year in a collection of Drozdoff’s piano works, which have been placed in the public domain by the Drozdoff Society, run by the composer’s granddaughter Natasha Cherny. You can hear this work, which consists of three short movements, in the video above, performed by Vyacheslav Gryaznov.

Another of the works included is DORICOverture for string quartet and piano, by Thomas Hewitt Jones, which was composed for the Dorico launch event at Bush Hall last October.

We are very grateful to the composers and publishers who have generously donated their music to be included as examples to show some of the things that Dorico can do.

You can read full documentation for the new chord symbol editor and find full details of all of the more than 70 other fixes and improvements in this release in the version history PDF. When you’re ready to take the plunge and install Dorico 1.1.10, you can download the update from the main Steinberg web site.

While a couple of our developers have been working on the chord symbol editors for Dorico 1.1.10, the majority of the team have been pressing ahead with work on the final planned update for Dorico 1.x, which is coming in the autumn. This update will include significant new functionality for cues, unpitched percussion, and keyboard fingering, along with some other improvements, including support for scaling practically any item in the score, shape note notation, improvements in handling different units of measurement in the user interface, and more. I plan to write a full development diary instalment soon to discuss a couple of the larger areas of focus in more detail, so keep your eyes open for that.

In the meantime, we hope you enjoy Dorico 1.1.10. Please continue to tell your friends and colleagues about Dorico and encourage them to give the software a try. We are working hard every day to build Dorico into the ultimate tool for working with music notation, and your support in spreading the word is invaluable. Thanks!